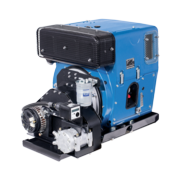 Based on a 1D81C, the Hatz Systems business field has developed a combination system that also includes a generator set in addition to an air conditioner compressor. Application fields for the Hatz Aircon APU are primarily construction machinery and commercial vehicles which are powered by a large engine. Installation in inland waterway vessels is also offered. Depending on the power requirement, the system can also be operated with different Hatz engines.
On average, construction machines are utilized between 30 and 50 % in daily use, the large engines run in idle the rest of the time. In addition to an average consumption of up to 20 l/h, this also leads to longer maintenance intervals. In comparison, trucks use a lot of fuel for the engine-independent air conditioning during the idle times.
The air-conditioning system can be installed, and hence the driver's cab supplied with air, using the compressor operated by the Hatz Aircon APU. At the same time, the batteries of the large equipment can be charged or other power consumers supplied. The combination unit needs just 2.1 l/h for this. The noise emission is just 74 dB (A) in a 7-meter radius.
The system also includes a Hatz-developed Multiflex instrument box with remote start function, this allows starting of the APU directly from the driver's cab, or in the final expansion stage even via cellphone. The Multiflex is CAN-BUS capable and can therefore be integrated in the vehicle electronics.

Benefits thanks to the Hatz Aircon APU 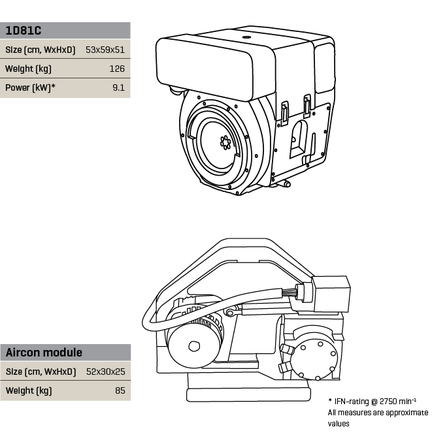 Depending on the cooling requirement and existing space, the Hatz Aircon APU system can also be adapted for larger and smaller engines. The basic system always remains the same: A smaller, more efficient, air cooled Hatz diesel engine operates an air conditioner compressor and an alternator for the power supply.
The size of the cab, outside temperature and desired inside temperature determine the required cooling power and hence the size of the compressor. The electrical system of the carrier vehicle determines the battery charging current. The optimum Hatz diesel engine is integrated in the system matching the power requirement.